of almost every machine 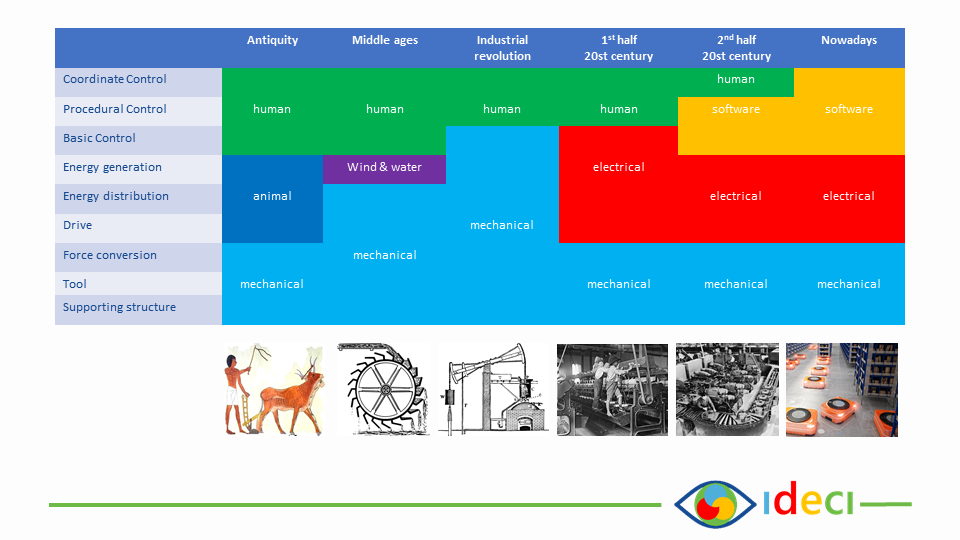 The history of this earth, and everything that lives upon it, really does fascinate me enormously.

After all, to understand the present you have to know the past.

What is in the past, serves as a context for the present, and what is in the future. Well-known titles such as ‘Homo Sapiens’ (Yuval Noah Harari), ‘a small history of almost everything’ (Bill Bryson) or less well-known such as ‘in Europe’ (Geert Mak) and ‘Spiegelzee’ (Salomon Kroonenberg), help me to view the world around me from a new perspective.

Let me make a small contribution as well: a short history of almost all machines. Actually a sequel to ‘The Genesis of Technology’. This story is actually inevitable, since Homo Sapiens is primarily a Homo Ingenerare: the creating human.

Technology and humanity have been inextricably linked since the use of the stick and fire as tools. Tools, technology, to make life easier for humans. ‘Technology serves humanity’ since … time immemorial. Although nowadays it seems way to often that actually it is us humans serving technology … every time a device or machine claims our attention by putting out a ‘ping’ sound.

Along with the development of humans and the society we live in, the tools and machines we use have developed as well. In fact, it’s the other way around: … and yes … it all started with a stick and fire. The fist axe came soon after. It was discarded when someone thought that things became a lot easier when you attached a handle to it: the axe was born. Hand tools helped humanity to survive through pre-history. And you can bet that it contributed to the migration of mankind across the globe.

Try killing a mammoth with your bare fists.

Now imagine that, as a pre-historic farmer, you are fed up with all that plowing in your field with your hand plow. . . and you come up with the bright idea to whip up your domesticated cow and make it pull the plough. Welcome to antiquity!

The diagram above this article shows how every tool and machine that mankind has invented ever since, consists of the same elements:

The plough consists of the plough share (tool) and a draw bar (supporting structure & force conversion). The ox provides the drive by putting its muscles to work (energy generation & distribution) in such a way that it and the team move forward. The farmer is responsible for starting, stopping and steering (basic control) of the entire assembly. But also to do this in the right order (procedural control), such that it starts before it is steered. He also determines how the field will be ploughed and whether the furrows will be drawn in north-south or east-west direction (coordinate control).

You will find the same elements in a modern, GPS-controlled plough. Its function and working principle has not changed over the centuries. What does change, is the technology that is being used. Wind and water energy was used in the Middle Ages. The industrial revolution in the 19th century brought the more powerful mechanical steam engines, and in the early 20th century the more efficient electric drive system took its place.

The invention of the computer, in the mid-20th century, made it possible that the more complex control tasks can also be done by the machine itself. More and more, the human operator is being replace by software.

Still …. with many machine builders it seems to be mainly about the mechanical part.

The fourth revolution is not driven by developments in the field of mechanics. It is electronics (data networks, wireless communication, etc.) and software (AI smart algorithms, etc.) that make things possible. . . that your competitors can’t do yet.

The classic way of engineering, in which mechanical engineering is leading and electrical engineering and software are subordinated to it, is not the way to exploit the possibilities of the 4th industrial revolution. All disciplines must work together in a mechatronic, multi-disciplinary approach to translate the functional and non-functional requirements into a solution that remains competitive.

It must be realized that developments in the software field are moving much faster than those in the mechanical and electrical engineering field.

The limiting factor is not in the technological possibilities but in the speed with which your company adapts.

And that, in turn, is determined by the speed with which your employees can adapt … so it will take a few years. Do you have the people to do that?

Digitisation! Standardisation! Smart Industry! Digital Twin! Nice slogans that you come across in every Industry 4.0 folder. But what does that mean for your company, on the shop floor, in the engineering department?

Would you like to discuss / brain storm on these matters? Get in touch!